Early last year, a new tool called Spacing, Punctuation and Symbol Correction Tool was added to TransTools+ (read the initial announcement here and watch a video about this tool). This tool improves readability and visual appeal of Word documents by fixing excessive spaces, enforcing correct spacing near punctuation, inserting non-breaking spaces where required, and replacing certain symbols with their typographically correct equivalents. Overall, the tool includes over 30 different configurable rules that allow you to create perfect Word documents which will be a pleasure to read. 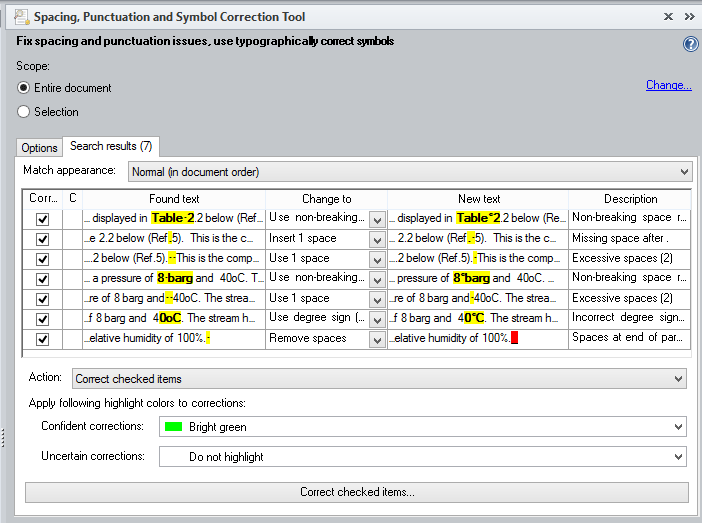 List of issues found by Spacing, Punctuation and Symbol Correction Tool before correction

Now, I would like to announce several major updates to Spacing, Punctuation and Symbol Correction Tool which will be very useful for many of you, especially those working with French, some other European languages, and Japanese.

Several other enhancements have been made:

For a more detailed description of the latest changes, go here.

The next versions of TransTools+ will include new tools for those of you who need to make formatting changes to Word documents before or after translation. As usual, other powerful features are in the works so watch future issues of this newsletter closely. Click here to subscribe to the newsletter.

You can use any tool that is part of TransTools+ without limitations for 30 days. To continue using it after that, you will need to buy a license at a very affordable price.

TransTools+ is not distributed under the annual subscription model which has become so common these days. Your license will be valid for the current major version of TransTools+, and new major versions will be released approximately every 2 years. All updates within the current major version will be free of charge, and you will also get technical support. You may activate TransTools+ licenses on up to 3 computers simultaneously provided that these computers belong to the same individual or employee.

Download TransTools+ today and enjoy this software which will make you even more productive!